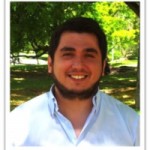 Ricardo Martín Ramirez graduated from UADER, Universidad Autónoma de Entre Ríos, where he now lectures on British and American culture.  At present, he is writing his Master’s dissertation on ICT in education for Universidad de Jaén, Spain.  In 2010 he received the IVLP scholarship granted by the US Department of State.  He works for the Ministry of Education and the Conectar Igualdad Program in the province of Entre Ríos.  In March 2013 he made a presentation on EdTEch at the TESOL convention in Dallas, Texas, US.  This presentation had been awarded TESOL Best of Affiliates.

Dealing with No Internet Connectivity in the EFL Classroom

EFL teachers trying to fully incorporate the use of computers in their classrooms usually have to endure adversities when it comes to having a class get wired to the internet.  This presentation seeks to explore software that can be used offline as a viable solution to connectivity hitches.